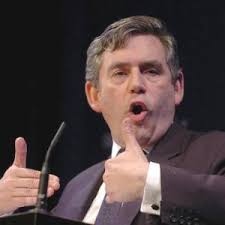 Bloody hell.  Just when you think political power play couldn’t get any more messy, the Tories have been handed ammunition.  As you’ve probably read, seen and heard by now, an anti-bullying charity has alleged that staff from Downing St. rang them.  Couple this with allegations that Brown can be a bit abrasive in his working manner and things might be looking even worse for Labour.

Or are they?  See, here’s the thing – if these allegations are true, Brown’s gone from someone who is characterised as being useless and indecisive to a real character with drive.

There are other things getting me wondering and I have to admit that I’m lost in ‘The Thick of It’ .   The charity in question, National Bullying Helpline, has said  it is completely independent politically. That’s good. So we can ignore the fact is has well-known politicians associated with it.

But I am worried the charity went public about an alleged Downing St. connection – I would want them to keep calls from me confidential.  I believe the argument they put forward goes something along the lines of they didn’t mention names, reveal things to the employer and so on.

But there’s a flaw here.  Let’s say I run a helpline for people that are addicted to sniffing socks. I release a statement saying that my helpline had 17 calls from sock sniffers in the last week, there’s not much you can draw from that.

But then let’s say I reveal that the sock sniffers work in a particular sock factory.  Wouldn’t the sniffers soon be sniffed out themselves?  I may not have revealed the details, but surely I revealed too much information?

If people think Brown’s been set up, even if the allegations are true (and the charity boss was clear to say they weren’t accusing Brown of being a bully), would people feel he was being victimised?

Would he be the villain that the public starts rooting for?

Keep an eye out for flying sausages! →
← Revival of fittest
Follow Us
Euroffice Gems