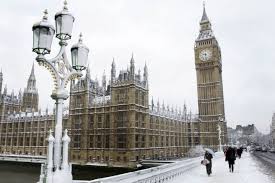 Hooray! It’s snowing! The white stuff hides all the grime and makes everything magical. As a child, I loved it when it snowed in London and, as an adult who’s fortunate enough to have a garden, I love it too. The pear tree’s boughs weighed down, snow creating miniature mountain ranges; foxes’ footprints in the morning and a cat who, we hope, will take her first steps out into a new world

Oh, yes. London as a city is wonderful when it snows. But wonderful for commuters? Not so much.

London is one of the world’s most important cities, one of the world’s richest cities and capital of the country that invented the modern railway.  So, how on earth do we manage to get snow so horribly, horribly wrong when it comes to public transport?

Think back to February this year when we had very heavy snow. London came to a standstill. London Underground was in disarray with suspended lines and closed stations. Overground routes and railway lines were severely disrupted and, if I remember correctly, all bus routes were closed for a time. Let’s just say that again: all bus routes. Apparently, even during the Blitz, not all London bus services were suspended.

But it was the same picture across the country. People could not get to work and the Federation of Small Businesses estimated that the disruption nationwide could have cost us £1.2bn.

It’s clear that The Powers That Be need to work harder to prepare for heavy snowfall. There are plenty of cities in the world that cope well with snowfall – look to any in Canada – so TPTB can’t use the excuse that there’s no precedent for these kinds of conditions. But, it would be remiss for small businesses to rely on any transport authority completely; we have to take our own precautions.

In the run up to seasonally bad weather – whether it’s extreme heat in summer or snowfall in winter – each office should have a person who’s responsible for keeping an eye on what the Met Office says is coming up. And have an emergency plan set up.

When snow is forecast (and transport is a problem), make sure people can take as much work home with them as possible. Tell them they can use their home email accounts for work if they don’t have access to an internal network. (Of course any emails sent from home would still be confidential and should be copied to their work accounts.) Ask people to brief their colleagues about their projects, just in case it’s not possible for someone to work at home; they might be able to share the workload, temporarily, with someone else.

If people need to be available on the phone, but are wary about giving their personal numbers out to clients, then buy some pay as you go mobiles for them to use. If they need to top up, they can claim expenses back later by providing a receipt.

You can run your business on skeleton staff. Figure out which people live closest / have the best chance of making it in, even if their regular role means they could work from home. See if they’ll be able to help with the other roles spread across the company, if only for a little while each day. Of course your request to them should only be a request – staff shouldn’t feel pressured into feeling they have to volunteer to work a different role for a little while.

And finally, make sure your insurance policies are in good order, and then you should have everything covered.

There are 2 comments for this article